The best known melody today for this poem was written by Niels W. Gade. He composed the song in 1859 and at Christmastide that same year it was published in the collection Børnenes Jul (The Children’s Christmas) op. 36, which also includes four small pieces for the piano. The simple lines of the melody go well with the slightly childish, lyrical form of the text. The song is one of the relatively few simple religious songs or hymns that Gade wrote, despite having been an organist for a large part of his life and therefore familiar with the national church. His melody has become widely known as a children’s song, especially through the collection Børnenes Musik (also called The Stork Book) from 1870, which ran into several editions. But it was not until the second half of the 20th century that Gade’s melody became the most widely accepted. Nowadays one often hears “The Infant Jesus” in an arrangement for a mixed choir, which has been included in several widely distributed choral anthologies, but the appearance of the text in the latest edition of the Danish hymn book has apparently unhesitatingly accepted Gade as the composer.

See the text and the music for Niels W. Gade’s Børnenes Jul (The Children’s Christmas) with piano accompaniment here (pdf)]

Johan Christian Gebauer
Of course Gebauer, as one of the leading 19th-century composers of songs for children, would also have plunged into Andersen’s simple Christmas song. Gebauer published his Juleaften. Sang for Børn (Christmas Eve, Song for Children) in Copenhagen in 1849, and the song was probably written for his own children. It is certainly a very simple 6/8 movement that accentuates the text, both by the melody and fine harmonious phrasing. Right up to the 1950s this melody was the most widespread, but was gradually superseded by Gade’s. Gebauer also wrote music for several of Andersen’s other poems for children, such as “Hist, hvor Vejen slaar en Bugt” (“Mother and Child”) and several of these, unlike his Christmas songs, have remained popular in Denmark today.

Henrik Rung
Finally, Henrik Rung composed “Barn Jesus i en Krybbe laa” (“The Infant Jesus lay in his Crib”) for a mixed choir in 1866, and the arrangement was published in December the following year. In 1874 a version for song and piano was published in which it was stated, however, that it had originally been arranged “for a choir of different voices”. The arrangement was written for Rung’s distinguished choir, the Caecelia Society, which devoted itself in particular to the classical Italian choral polyphony of the 16th and 17th centuries, but also sang a number of works by Danish composers.

“Christmas Eve” was first performed at the choir’s concert in the chapel of Christiansborg Palace in Copenhagen on 29th November 1866, when Mozart’s Requiem (1791) was also on the programme. It could moreover be heard at a few of the choir’s later concerts, but apparently enjoyed no particular popularity as a solo. The song’s at times large vocal leaps also require an experienced singer. 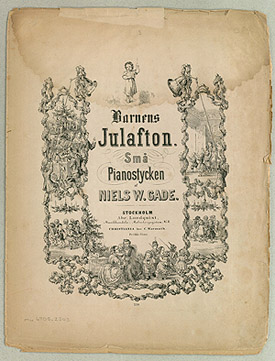 In this Swedish version of N.W. Gade’s Børnenes Jul (The Children’s Christmas) a number of scenes from Christmas Eve are depicted and illustrated in the collection’s small pieces for piano. The collection Børnenes Musik (Children’s Music) “collected by a Mother” has been nicknamed The Stork Book. The editors were the music historian and composer S.A.E. Hagen and his wife, Serine, and the book contained just under 150 children’s songs. The collection was dedicated to Hans Christian Andersen, and a great many editions were published from 1870 and onwards. Hagen chose Niels W. Gade’s melody for “The Infant Jesus”, which in this way was widely distributed at an early stage, but none the less only became generally known after 1950.